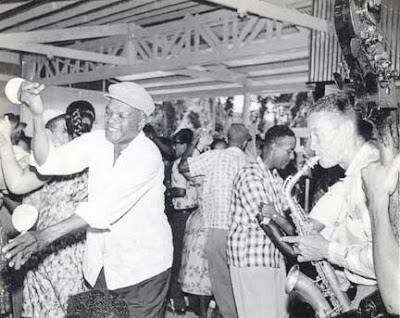 George Shermacher/Scheermaker during a party back in Suriname

George Scheermaker was one of the great Suriname saxophone players, he had a special vibrating sound with his sax.
This cd consist mostly of "kotodansi" traditional music for the woman (Koto Misies) to show of there traditional Creole dresses. But there is also a sweet Suriname waltz.

The clothing for which this music is ment is called "Koto Misi" which also is the name for the lady/woman wearing it.

The wife's of the slave owners where very jealous at the nice figured slave girls/woman so they made them dress up in big baggy clothes, so the masters would not me attracted to them.
Modern Koto Misi

During slavery it was also not allowed for the male & female slaves to openly have contact with each other.
So a "dress code" was developed to give messages to the community.
Especially the "hat pieces" where used for that matter.
So a woman could let the gentlemen know if she was available, married or in mourning just to name a few possibilities.

All compositions are by G Scheermaker & A Gemerts
Posted by Ben The Balladeer at 10:42 AM 3 comments: Links to this post 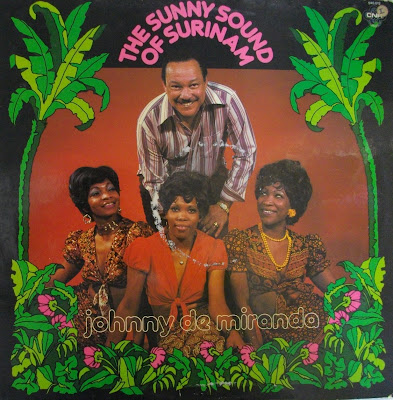 Johnny de Mirande was born in 1924. He started playing at an early age. His first violin lessons where at the age of 7.
At the age of 16 he played with the Suriname Philharmonic Orchestra with leader Eddy Wessels.
Later he also started playing the clarinet and alt and tenor sax.
During the 40's he joined and played with "Piskadere Boys" from Curacao on the Duch Antilles.
In the early 50's he went back to Suriname at the request of the then popular orchestra "The Swing Masters" probably with band leader M.Vasconcellos and Alberto Gemerts.
During that time he also played with "Bios Suriname Boys" with Eddie Snijders and Carlo Jones, but it did not last long they had only 3 performances during '51 and '53 and broke up.
In 1955 he moved to The Netherlands and joined Max Woiski's band and played, congas, drums, piano and did vocals.
Johnny  made many solo recordings. 2 albums of which you can see the covers here. 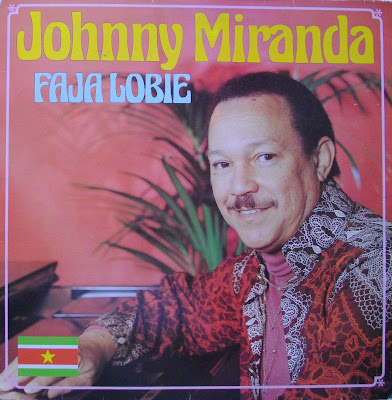 Todays song is from his album " The Sunny Sound Of Suriname" from '74
Players on this album are Sinnie Boona, Bennie Wijngaarde, Stan Lockin, Rene van der Lande, Carlo Brandon, George Scheermacher,Borris Zijlstra.
The  album was produces by Alberto Gemerts
I've never seen his other album "Ritmo Tropical" from '71 but I know 3 songs from that album:
Pajasiman, Baka Thalia and Masra Bedoisi.
If anyone has the album...........please contact me.
Johnny de Miranda _ Sekantie
Posted by Ben The Balladeer at 5:35 PM 7 comments: Links to this post